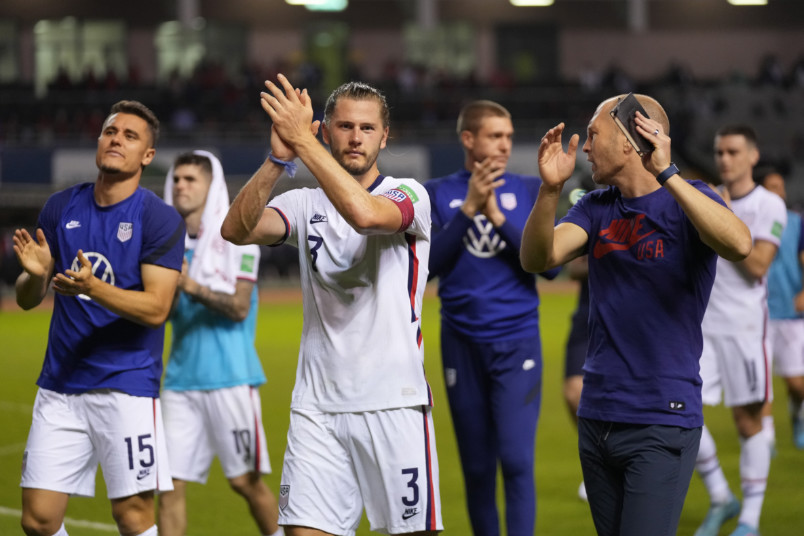 By Charles Boehm – SAN JOSE, COSTA RICA (Mar 31, 2022) US Soccer Players – The Costa Rica supporters came from miles around. Many arrived long before kickoff, grooving to the music created by drummers and brass players as carnival-style dancers performed. Others hurried under their national stadium’s swooping arched roof at the last minute after a long day at work. However they managed to make it, this was a party not to miss.

Even though their team was effectively stuck in 4th-place, barring the most unlikely of blowout results, they filled every one of the 35,175 seats. The pulsating wall of sound they generated made light of the venue’s running track and broad dimensions compared to the claustrophobic old Estadio Saprissa. It drowned out the devoted band of US supporters perched way up in the upper southwest corner in a way that Mexico failed to do at Estadio Azteca the previous week.

It was easy to understand why it’s difficult to win here. Despite a heavily rotated lineup to protect the regulars carrying yellow cards from earning suspension in the intercontinental playoff, Costa Rica was a force. And when the visitors did break through, as they did repeatedly in the opening minutes, world-class goalkeeper Keylor Navas made save after save.

“I think the answer is, look outside. Look at the stadium, look at the atmosphere,” said USMNT head coach Gregg Berhalter in his postgame press conference, the first held in person in some time. “The atmosphere gave these guys wings from Costa Rica. Really incredible fans, I think some of the best fans in Concacaf, for sure. But tonight was a celebration, a celebration for Costa Ricans and they’re proud of the way that they came back and dealt with these last eight games in magnificent fashion.”

When Juan Pablo Vargas and Anthony Contreras scored off second-half restart situations, it felt like a powerful Concacaf tradition reasserting itself. Los Ticos would win again. The beauty, and the relief, for the USMNT was that it did not matter. The hard-earned points they had already banked would see them through to Qatar 2022.

“We obviously set goals at the beginning of qualifying which is, win the group, win all your home games; some goals that went unaccomplished. But the ultimate goal, bottom line, is pass/fail,” a content USMNT defender Walker Zimmerman told reporters postgame, wearing a champagne-soaked black t-shirt bearing the simple message “QUALIFIED” above the program’s “Only Forward” slogan.

As is often said, Concacaf qualifying is a marathon. However, sometimes it’s a sprint, too.

Costa Rica collected just six points in the first half of the Octagonal, only to storm back and take 19 of the final 21 points available to them to climb into position to reach yet another World Cup with a win over Oceania champs New Zealand. They ended up tied on points with the USMNT, who secured automatic qualification via their hefty goal differential advantage, another sign that every single goal, every single minute matters.

The most demanding fans and pundits around the program may find the conclusion to this road unsatisfying. History shows that it will have little to no effect on the performance at the big event, which kicks off under the Arabian sun in mid-November. No team in the world has competed, let alone qualified, with as young a team as these Yanks.

“Reflecting on these last seven months in particular, and how much his team has grown together, being the youngest team in the world to qualify for the World Cup is no easy task,” said Berhalter. “But what we saw was the resilience of the team, the strong mentality of the team, and absolute focus to reach our goal. So all in all, we’re really proud of the guys, really proud of the way they competed throughout these 14 games. Even tonight, I thought the attitude and the mindset was fantastic going out there to win the game, not going out to hang on. So it’s a proud moment for the team, proud moment for US Soccer and we’re looking forward to competing in the World Cup again.”

Only this outcome could vanquish the pain of 2017’s shortcomings. Only this achievement could shift the discourse around this incredibly talented crop of players, some of them barely old enough to legally enjoy a celebratory beer even under Costa Rica’s drinking age of 18, from “could” to “did.” That bright future can now proceed.

“The weight has carried over,” winger Tim Weah had said on Tuesday of the 2018 cycle’s troublesome legacy. “The media has classified us as the golden generation and the generation that’s going to qualify for the next World Cup. So I think we do carry a lot of that weight on our shoulders. And you know, this qualifying for the World Cup is not only for us, it’s for the group before. It’s for the Clints (Dempseys), it’s for DeAndre (Yedlin), it’s for Jozy (Altidore), all the guys that didn’t get to do it again, we’ve now taken up that role to get the job done.”

Christian Pulisic has come of age under a microscope. He’s both the standard-bearer of this new generation and a veteran from five years ago. His emotions were unmistakable Wednesday night.

“It was one of the toughest days of my life when we didn’t qualify for the World Cup. We’re all extremely proud and, I don’t know, this is where I’ve always wanted to be and right now, just the emotions are a bit crazy,” he said with a mix of joy, relief, and contemplation.

The Chelsea star expressed his pride in “the resiliency of the group” after weathering everything Concacaf traditionally offers, all wrapped up in an extra-demanding compressed post-COVID schedule. No one will be happier to now shift focus towards the global spotlight awaiting this fall.

“We’ve come down and played in some really tough places, we’ve played in some big games and when we’ve needed results, we’ve got them,” Pulisic said. “And I just like the bite of this team, and I think we have a lot of quality as well. And yeah, I think we can be a force going into the World Cup.”