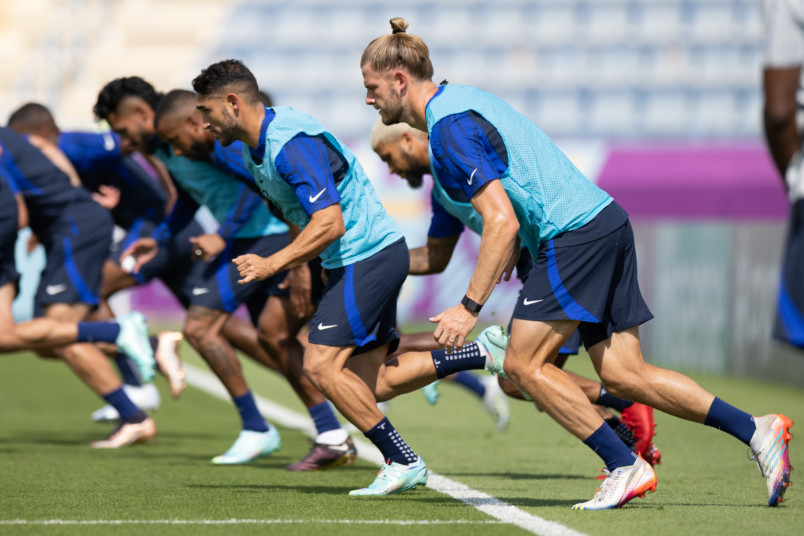 By Clemente Lisi – NEW YORK, NY (Nov 14, 2022) US Soccer Players – Following two years of World Cup Qualifying, the Nations League, and months of friendlies, the start of the 2022 World Cup is under a week away. It will be a tournament of firsts. It is the first time FIFA is holding it in November. It’s the first time that a World Cup with 32 nations will happen during a compressed 29-day window. It’s also the first time teams will have extended squads.

USMNT manager Gregg Berhalter named his 26-member squad last Wednesday to much fanfare. The naming of the roster officially kicked things off for the final. With that came the chance to dissect the choices and debate lineups and tactics.

“We believe we have a talented group, a strong team spirit and one that is ready to compete,” Berhalter said after naming the squad. “We are extremely proud and honored to represent the United States and appreciate all the amazing support from our fans as we head to Qatar.”

The US will field its youngest squad, since 1990 with an average of 25 years and 175 days. With the United States prepping for its World Cup opener in a week on November 21 against Wales, here are three things to watch for heading into Qatar 2022.

Gregg Berhalter has said on numerous occasions that the World Cup is two tournaments for the USMNT, the group stage and the knockout round. The World Cup has a way of being overwhelming. The group stage can be unforgiving, especially for teams that lose their opening match and see the odds of advancing drop. The right mentality and a feeling of cohesion going into any tournament are key.

He was a member of the 2002 team coached by Bruce Arena that reached the quarterfinals. It was at that World Cup that the US shocked many with a win against Portugal in their opener. The team put that aside in the knockout stage, downing Mexico in the round of 16 and only narrowly losing to Germany in the quarterfinals.

Berhalter famously played in those two contests, coming in for injured defender Jeff Agoos. It was Berhalter’s shot that was not called a handball in the quarterfinals. Berhalter knows that if the US can start strong against Wales, the scope of the group stage changes.

Boosted by England and MLS contingent

There are six players on the US squad hailing from the Premier League: Christian Pulisic, Brenden Aaronson, Tyler Adams, Antonee Robinson, Tim Ream, and Matt Turner. Add to that Ethan Horvath at Luton Town and Josh Sargent at Norwich City, both of whom play in the second-tier Championship, and this is a US team that can go toe-to-toe against Wales and England. Inter Miami defender DeAndre Yedlin also has Premier League experience.

All that gives the US a boost when you share a first round group with Wales and England. In addition to that, sending the MLS-based contingent, which is made up of nine players, to Qatar a week early to acclimate to the weather and conditions is a bonus. That’s a big plus, something Wales and England have not been able to do because of domestic league commitments.

Again, Berhalter was a player who understood both MLS and what it was like to play in Europe. He also coached on both sides of the Atlantic. Finding the right balance and going with the core that helped the US qualify is certainly a big part of the equation in the days leading up to the tournament.

Key players off the bench

The entire team gets a week to train together for less than a week ahead of the Wales match. The compressed time-frame is something all teams will have to deal with. The challenge will be overcoming it sooner rather than later and who can do a better job of it. Berhalter’s choice of strikers, most notably those who aren’t likely to start, will matter. World Cup history is loaded with clutch players who came out of nowhere to make the difference in the second half or extra time.

That’s something the USMNT could benefit from once the games start. That mix includes attacking options that could make the difference late in a game should the US be either tied or down and in need of a goal.

For the US, this World Cup has been four years in the making. In the end, it could come down to this crucial week and what happens as a result of next Monday’s Wales match. Berhalter is correct when he says the World Cup is two tournaments. The time to navigate the first half of the World Cup is now. The work they put in, and the results that follow, will determine whether they get a chance to compete in the second half.