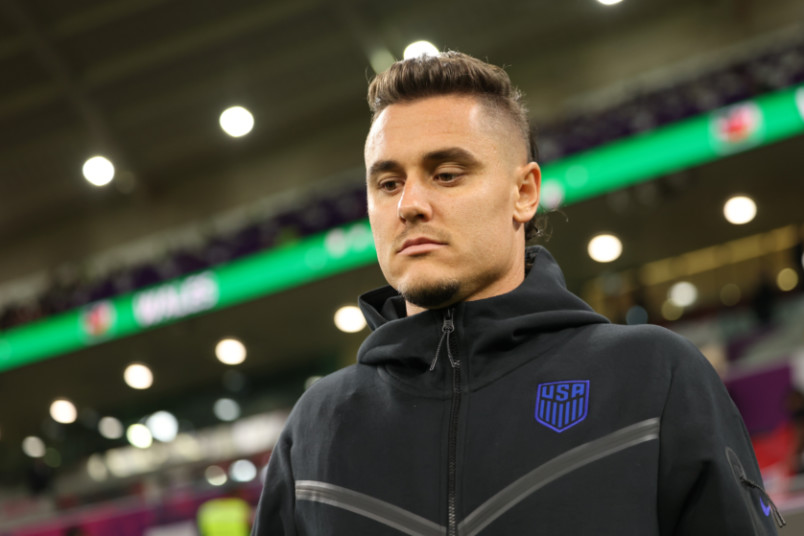 By Jason Davis – WASHINGTON, DC (Jan 13, 2023) US Soccer Players – Attackers get the glory, but every chief soccer officer in MLS knows there’s no chance of winning a championship without a stout back line. The market for center backs across the league has been particularly interesting this offseason as clubs shuffle their defenses in the quest for trophies. 2023 will also deliver more games with clubs that qualified for the Champions League facing the chase for a continental title along with the Leagues Cup on the schedule.

The league’s reigning champion, not content to rest on its laurels and cognizant of a big workload, secured one of the free agent market’s most sought-after names. USMNT player Aaron Long, part of the USMNT roster for the World Cup in Qatar, waited until his return from the tournament to make a decision about his club future. Following seven years in New Jersey playing for the New York Red Bulls, the club that nurtured his talent and helped turn him into one of the league’s best defenders, Long signed a deal with LAFC last week.

It’s easy to see why LAFC wanted Long and why Long was enticed to move to the West Coast. It represents a homecoming for the player, who grew up in Southern California and played college soccer at the University of California, Riverside. For Long, the chance to play for a championship-caliber team in his figurative backyard makes a lot of sense.

During his run in New Jersey, Long won the MLS Defender of the Year Award and a Supporters’ Shield in 2018 but did not lift the MLS Cup trophy. Joining Steve Cherundolo’s outfit in Southern California means walking into a group with a championship trophy in its case and a legitimate chance to win other honors.

In addition to Long, the club’s roster included center backs Giorgio Chiellini, Jesus Murillo, and Honduran newcomer Denil Maldonado. Chiellini’s age will impact the number of minutes he’s able to play, while 24-year-old Maldonado is a depth signing brought in to help replace the departed Eddie Segura and Sebastian Ibeagha.

Perhaps in no league in the world is it more difficult to repeat as champions than in MLS. The complicating factor of the playoffs on its own makes the feat remarkable, but it’s the league’s budget restrictions that can make it nearly impossible. Keeping together a championship team, much less adding new talent to improve, requires deft maneuvering. Considering Long’s pedigree and value, his arrival is a coup for LAFC.

Long’s USMNT teammate Walker Zimmerman earned a Designated Player contract with Nashville SC following consecutive Defender of the Year awards in 2020 and 2021, an indication of the premium clubs place on top-tier center back talent. Players with intimate knowledge of the league who have played at a high level for multiple seasons are worth the spending necessary to keep them from going abroad.

Zimmerman will have a new partner in Nashville this season as he aims to lead the club back to the MLS Cup playoffs for the fourth straight season. Nashville traded Dave Romney to the New England Revolution in December before acquiring Nick DePuy from the LA Galaxy for $50,000 in allocation money and a 2024 draft back on January 5th. Nashville also acquired Atlanta United defender Laurence Wyke to add to its depth at the position.

For Atlanta, the big news is the return of Miles Robinson after a long-term injury forced him to miss most of 2022. Robinson’s rise to prominence as one of the league’s best defenders paused with a lost season. Now healthy, he should be in the hunt for postseason accolades.

When it came to free-agent center backs with impressive resumes, Long was the second domino to fall. Longtime FC Dallas defender Matt Hedges signed with Toronto FC on December 19th following negotiations with a number of clubs. Hedges’s body of work with the club that drafted him landed him healthy interest across MLS when his contract ran out in Texas and FC Dallas was unable to reach an agreement with him on a new deal.

Joining Toronto FC means joining Bob Bradley’s project, where the late returns of 2022 following the arrivals of Lorenzo Insigne and Federico Bernadeschi showed promise for the year to come. It was already too late for the Reds to salvage the season when the Italian pair arrived last season, but with a revamped defense and another year for Bradley’s influence to change the club, Toronto looks like a team on the verge of a breakthrough.

Bradley highlighted Hedges’s MLS experience in his comments on the center back’s arrival and pointed to his “dependability” in the back. Center backs that coaches can count on week-in, week-out are worth their weight in gold for coaches navigating a long, tricky, regular season, and Hedges checks that box for a club that conceded the third-most goals in the league last season.

There remains one big center back name on the free agent market, though his provenance makes it possible he’ll leave the league for a move to South America. Peruvian defender Alexander Callens is available to MLS teams but is also rumored to have significant interest from elsewhere.

Longtime TFC defender Chris Mavinga left Toronto to rejoin his former coach Greg Vanney in Los Angeles as a free agent. Vanney turns to a player who helped him win a triple haul of trophies in 2017 in the quest to get the Galaxy back to the top of the league.

For Dallas, replacing Hedges meant turning to one MLS veteran and one Texas native who has played his entire professional career to this point in Croatia. The former is former LAFC defender Ibeagha, while the latter is 22-year-old Arlington, Texas-born Amet Korca. That pair will join Jose Martinez (31 starts in 2022) and Nkosi Tafari (11 starts) in the club’s group of central defenders.

In addition to Dallas’s move for Korca, a number of other clubs went outside of the league for center back help this winter. With other additions still possible, the list of teams bringing in defenders from abroad includes Vancouver, Austin, and, perhaps unsurprisingly, St Louis.

Vancouver’s new foreign signing is Mathías Laborda, a 23-year-old Uruguayan who broke through at Nacional in his home country. The Whitecaps conceded 57 goals in 34 games last year, underlining the need to rework the defense.

In Texas, Austin FC is hoping to back up its 2nd-place Western Conference finish in 2022 with another strong showing and a challenge for an MLS Cup title. Ruben Gabrielsen and Julio Cascante anchored last year’s defense in the Texas capital, but only Cascante returns. Gabrielsen requested a transfer back to his native Norway, leaving a hole in the back line for head coach Josh Wolff.

The club hopes Finnish center back Leo Vaisanen is the player to fill that hole. The 25-year-old moved to MLS from Swedish club IF Elfsborg, where he spent three seasons. A full Finnish international, Vaisanen joins compatriot Alex Ring in Austin.