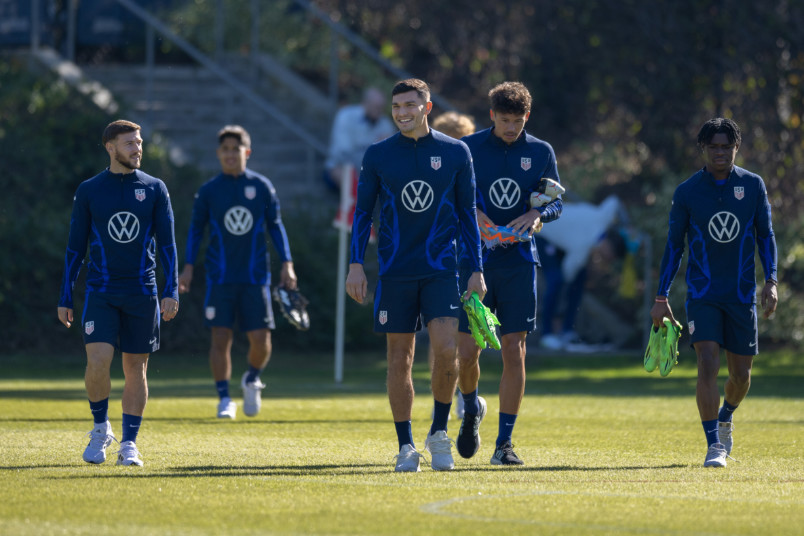 By Clemente Lisi – NEW YORK, NY (Jan 23, 2023) US Soccer Players – It’s January, and that means the USMNT is back in action with its annual camp that concludes later this week with two friendlies against Serbia and Colombia. The games mark the first time we will see the team since it was eliminated at the World Cup by the Netherlands in the round of 16.

The camp, which began this past Saturday, will be overseen by assistant coach Anthony Hudson as US Soccer continues to conduct its post-World Cup review. For 2023, the camp focuses on a calendar year where the USMNT plays in the Concacaf Nations League and Gold Cup, but there’s also an eye toward the 2024 Summer Olympics in Paris. Eight Olympic-eligible players are in the squad, including goalkeeper Gaga Slonina and striker Matthew Hoppe.

“I have to give a huge amount of gratitude and respect to Gregg Berhalter for bringing me in the first place and trusting me and allowing me to experience the last few years,” Hudson said in a Q&A last week with USSoccer.com. “So that in itself makes it a little bit difficult. However, I’ve been asked to take the team for a couple of games and amongst all of it is a feeling of immense pride.”

This camp is a great chance to see which players could earn roster spots down the road. Five MLS-based players who featured in Qatar, goalkeeper Sean Johnson, defenders Walker Zimmerman and Aaron Long, midfielder Kellyn Acosta and striker Jesus Ferreira, are in this camp, but there’s also other talent to consider.

For example, the addition of three dual nationals, defender Jonathan Gomez, midfielder Alejandro Zendejas, and striker Brandon Vazquez, add some additional options to the roster. As we’ve learned from previous January camps, the opportunity is there for players who could be called up for the Nations League two months from now depending on how they do over the next two weeks.

In terms of veterans, forward Paul Arriola, who has 48 caps, returns to the squad after last appearing in the pre-World Cup tune-up this past September against Saudi Arabia.

Of the 24 players on the roster, 15 currently play for MLS teams. The list includes veterans like Zimmerman and Long, but there are also several uncapped players such as Vancouver Whitecaps defender Julian Gressel and Columbus Crew midfielder Aidan Morris. The 29-year-old Gressel, a right back, has played in MLS since 2017 when he was a member of Atlanta United FC. Morris is a center mid at club level, with both trying to use this camp to work their way onto the USMNT’s depth chart.

January camps have traditionally been a great place to feel out talent. For example, 30 players who have debuted or earned their second cap during the USMNT’s first camp of the year went on to make a World Cup roster. From the US’s roster that recently returned from Qatar, nine players earned had earned a first or second cap during a January friendly, including Zimmerman, Matt Turner, Tim Ream, Tyler Adams, and Brenden Aaronson.

The World Cup remains a powerful draw. It should not be underestimated how many new fans the US picked up along the way after what they saw on TV. While these two friendlies are nothing like what fans experienced at the World Cup, it is the start of a process that in 2023 includes the Nations League in March and this summer’s Gold Cup.

Southern California has consistently been a soccer hotbed over the past few decades and the team will feel right at home training and playing there for the remainder of this month. The US, for example, has played in California 114 times, which is more than any other state.
The USMNT’s two games, both in Southern California, are against Serbia on January 25 at BMO Stadium in Los Angeles, the first time the Americans play a game at the home of LAFC. The US faces Colombia three days later at Dignity Health Sports Park in Carson, which is home to the Los Angeles Galaxy.

The January camp kicks off the start of the USMNT’s year, but it has also become a rite of passage for many young players. While this isn’t the same roster you’re used to normally seeing, there’s plenty of talent here as the 2026 World Cup cycle gets off the ground.