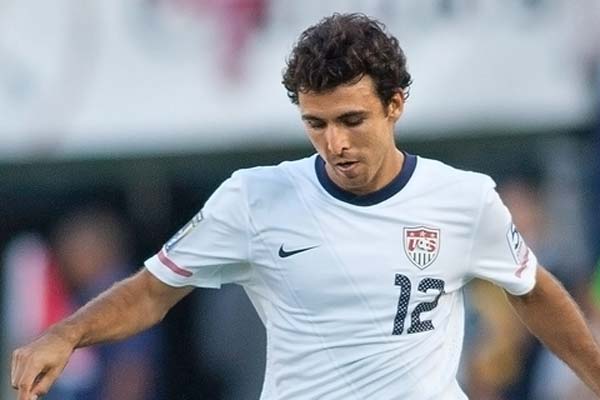 Jonathan Bornstein scored on his USMNT debut against Denmark on Jan. 20, 2007.  A converted forward, Bornstein is a strong left back who understands his position, but is not afraid to follow his offensive instincts and steal forward to help the attack.

Bornstein took MLS by storm in 2006.  A fourth round pick for Chivas USA, he won the MLS Rookie of the Year award after scoring six goals and four assists in his debut season.  He was used all around the park, but eventually settled into defense.  The following year he helped his team to the Western Conference regular season title.

He became a regular with the USMNT during the 2010 World Cup Qualifying cycle, and was part of the squad for South Africa. He got the start against Algeria in the Group Stage of the 2010 World Cup and again against Ghana in the knockout round.

Bornstein left MLS following the 2010 season, signing with Tigres in Mexico’s Liga MX. He later moved to Queretaro before joining Israeli club Maccabi Netanya in June, 2018. In July, 2019 Bornstein returned to MLS as a member of the Chicago Fire.

2011: Started against Paraguay on March 29th.  Pressed into service in the Gold Cup final, subbing on in the 11th minute when Steve Cherundolo was injured.
2010: Played in the January friendly against Honduras. Played in both Sendoff Series games and was named to the World Cup roster.  Played two games in the World Cup, starting against Algeria and Ghana. Started against South Africa on Noiv 17th.
2009: A second-half sub against Honduras on June 6th. Played in the October World Cup Qualifiers, scoring the tying goal against Costa Rica on the final match day to send Honduras through to the World Cup.  Honduras declared a national holiday and announced Bornstein was welcome to enter the country without a visa as their honored guest.
2007: Won his first cap on January 20 where he also scored his first goal. A member of the Gold Cup winning squad and the Copa America squad. Started August road loss in Sweden.

2018-19: Finished in 3rd-place in the regular season with Maccabi Netanya and 4th in the Championship round. Joined the Chicago Fire in July, 2019 and finished 8th in the East.
2017-18: Finished 16th in the 2017 Apertura and 14th in the Clausura with Queretaro. Left Liga MX for Israel with Maccabi Netanya in June, 2018.
2016-17: Finished 11th with Queretaro in the 2016 Apertura and 15th in the 2017 Clausura.
2015: On loan to Queretaro, Bornstein won a starting job and was part of the squad that made the Clausura final. Queretaro made his loan a permanent move at the end of the season.
2014: Loaned to Atlante for the 2014 Clausura. Joined Queretaro on loan for the 2014 Apertura.
2013: Part of the Tigres squad.
2012: Played in the CONCACAF Champions League for Tigres.
2011: Made seven appearances for Tigres in the Clausura season, but failed to get playing time in the Apertura season.
2010: Part of a Chivas USA squad that finished last in the West and missed the playoffs.  Bornstein announced he was signing a pre-contract with Mexico’s Tigres for the 2011 Clausura season.
2009: Key member of a Chivas USA squad that finished fourth in the Western Conference, exiting the playoffs in the first round.
2008: Recovering from injury, Chivas USA moved him into an attacking role.
2007: Made 25 regular season and post-season starts in defense for Chivas USA team that was Western Conference champion, but which lost to Kansas City in the first round of the playoffs.
2006: Drafted in the 4th round by Chivas USA, where he went on to win MLS Rookie of the Year. Started 34 games in total, scoring six goals and registering four assists.