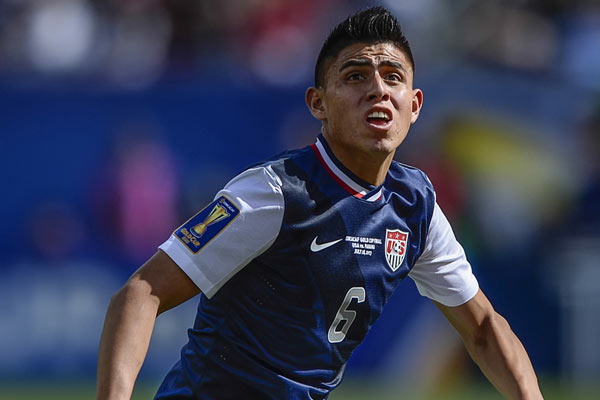 USMNT player Joe Corona emerged in CONCACAF as a player with a choice. Born in Los Angeles, he could represent the United States, Mexico, or El Salvador. After playing briefly with Mexico at youth level, Corona chose the USA. After leaving San Diego State after his freshman season, Corona joined Tijuana in 2010, winning promotion with the club. He is an Apertura champion with Tijuana. With the National Team, he was a member of the Gold Cup squads in 2013, 2015, and 2017. Corona joined Club America on loan for the 2018 Liga MX Clausura and Apertura. He won the Apertura title with America, returning to Tijuana for the 2019 Clausura. In March, 2019 he joined the LA Galaxy, moving to Houston in 2021. He signed with GIF Sundsvall in 2022.

2022: Left Houston in February but remained under contract, going on loan to GIF Sundsvall on March 29.
2021: Finished out of the playoffs with the Dynamo.
2020: Finished 10th in the Western Conference with the Galaxy. Selected by Houston in the re-entry draft in December.
2019: Joined the LA Galaxy advancing to the Western Conference semifinals.
2018-19: Won the Apertura with Club America, returning to Tijuana for the Clausura.
2017-18: Finished 3rd in the Apertura advancing to the semifinals with America. Finished 2nd in the Clausura advancing to the semifinals.
2016-17: A member of Dorados, returning to Tijuana at the end of the Clausura season. Finished in 11 place with Tijuana in the Apertura. Traded to Club America following the season.
2015-16: Still contracted to Tijuana, the club loaned him to Dorados for the 2016 Clausura.
2014-15: Played 28 games for Atlas. Joined Veracruz on loan for the 2015 Apertura finishing in 8th-place.
2012-13: 11 starts in the Clausura season for Tijuana.
2011-12: A solid Spring season for Tijuana, who win the 2012 Apertura title.
2010-11: Establishes himself as a regular with Tijuana.
2009-10: Signs with Tijuana and wins promotion to Liga MX.