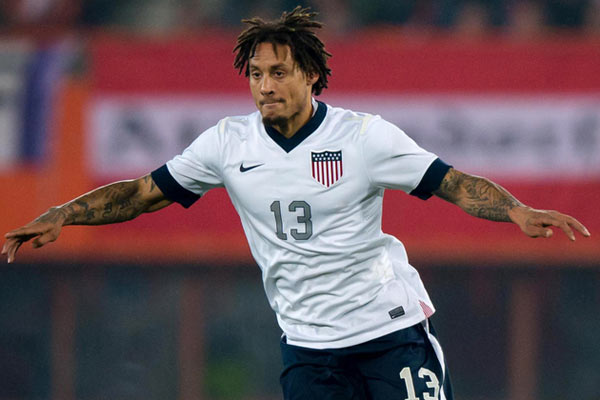 The son of a member of the US military, Jermaine Jones spent his early years in the United States before returning to Germany with his mother.  This allowed Jermaine to play for either the USMNT or Germany.  He chose Germany, appearing for their youth teams.  With Jones not getting capped at senior National Team level, a FIFA rule change allowed him to switch to the United States in 2009.

A broken leg took him out of contention for the 2010 World Cup squad, and Jones received his first cap against Poland on October 9th, 2010 in Chicago.

At club level, Jones is an established talent in Germany’s Bundesliga, playing first for Eintracht Frankfurt before moving to Bayer Leverkusen, back to Frankfurt, and ultimately signing with Schalke 04 for the 2007-08 season. Jones left Schalke during the 2014 January transfer window, signing with Besiktas in Turkey’s Super Lig. Jones saw out his contract with Besiktas, joining the New England Revolution in August, 2014. The day before the start of the 2016 MLS season, Jones signed with the Colorado Rapids. He joined the LA Galaxy for 2017, leaving at the end of the season. Jones officially retired in September, 2018.

2017: Signed with the Galaxy as an MLS free agent in January. Left the team at the end of the season.
2016: Part of the turnaround in Colorado, advancing to the playoffs. Left the club at the end of the season.
2015: Made the playoffs with New England, letting his contract lapse at the end of the season.
2013-14: Played the first-half of the season with Schalke but left the club in January for Besiktas. Finished 3rd with Besiktas in the Turkish Super Lig. Joined the New England Revolution in August.
2012-13: Finished 4th in the Bundesliga with Schalke 04 and made the Round of 16 in the Champions League.
2011-12: Qualified for the Champions League with a 3rd-place finish with Schalke 04.
2010-11: Joined Blackburn Rovers in the Premier League on loan from Schalke for the second half of the season.
2009-10: Missed the entire season with a broken leg.
2007: Transferred to Schalke 04 where he was a regular starter.
2005: Returned to Eintracht Frankfurt.  A leg injury kept him out of action for eight months.  After regaining fitness, he was eventually named captain of Eintracht Frankfurt.
2004: Joined Bayer Leverkusen where he eventually broke into the senior squad.
2001-02: Became a regular starter with Eintracht Frankfurt’s senior squad.
2000: After spending five years in the Eintracht Frankfurt youth program, Jones emerged as a regular with Eintracht’s reserve team.