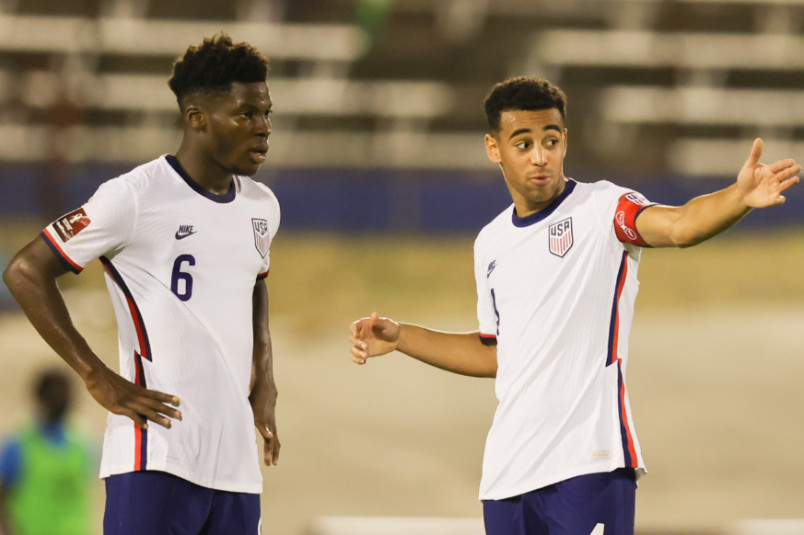 By Jason Davis – WASHINGTON, DC (Jan 26, 2022) US Soccer Players – Core strength is big these days. Drive past any mixed-use development or strip mall in a major American population center, and you’re bound to catch a glimpse of one of the many gym chains pushing the idea that core strength is where it’s at. Row your way to fitness. Do crunches and planks. Use balls, ropes, or bands. Get the middle of your body right, and everything else will follow.

The USMNT has been doing some core training over the last year. The players individually, but also the team. The core in question is the middle of the lineup and, in 2022, the unquestioned strength of the team.

USMNT head coach Gregg Berhalter hasn’t often had the luxury of consistency with the player pool over the last 12 months. Whether through injury, COVID-19, or other sundry reasons, the makeup of his roster from camp to camp has fluctuated wildly.

For a team with so many young players filling crucial roles, playing good soccer became all the more difficult. There was always going to be a learning curve, but the intense pressure from the beginning of World Cup qualifying steepened it.

Working out the strongest lineup required patience and a healthy dose of luck. When it came to the midfield, the makeup of the trio of players central to Berhalter’s preferred 4-3-3 formation involved turning to two players long presumed to be the future of the team and one whose rise was something more of a surprise.

Both Tyler Adams and Weston McKennie arrived at the World Cup qualifying stage ready to assume their places as key contributors and team leaders. Their integration in the national team came over a period of years when McKennie launched his professional career at Schalke in the Bundesliga and Adams took over the New York Red Bulls midfield as a precocious homegrown player.

Like many young players, the duo needed to prove themselves capable of consistent performances to earn Berhalter’s trust. Even undeniable talent doesn’t get a free pass. Adams’s move to the Bundesliga in 2020 upped the expectations that he would soon anchor the midfield for the Americans, especially in light of Berhalter’s decision to scrap an early tactical plan that involved deploying him at right-back.

With Adams back to the midfield and McKennie’s star on the rise with his move to Italian powerhouse Juventus, there was just one question: Who would be the third player in the trio?

November 2020 provided a tantalizing possibility: Adams, McKennie, and potential US international Yunus Musah. In two friendlies that month, the trio played as a group and showed signs of a well-balanced unit. Adams, the ground-eating defensive dynamo. McKennie, the do-everything box-to-box menace with a penchant for late runs into the box. And Musah, the physically gifted dribbler, capable of driving the ball in the attacking third and springing his teammates for attacking moves.

The first competitive test for the USMNT in 2021 arrived with Musah still in limbo and one of the pair of young American stars in the making unable to make a full impact.

Both Adams and McKennie were certain starters coming into the new year if healthy and available for international duty. The much-anticipated arrival of the final form of the USMNT heading into World Cup qualifying was set to arrive just in time.

The problem Berhalter kept running into during the buildup to the stacked 2021 calendar was injury. Whenever it looked like the long-promised triumvirate of Christian Pulisic, Adams, and McKennie would finally get a chance to play together, taking the first steps towards launching the USMNT into this new era, one of them would be missing.

Case in point: When the final rounds of the first-ever Concacaf Nations League arrived in June, it looked like the perfect opportunity to test the best the United States could offer against a tough Honduras team in the semifinal and presumably the region’s powerhouse Mexico in the final.

But Adams arrived from Germany fresh off an injury stint that kept him out of the final five games of the Bundesliga season. Berhalter included him in the Nations League roster anyway, believing that the Leipzig midfielder might be able to play a role in the quest for the group’s first trophy under the manager.

Adams did get into the final against Mexico and helped the USMNT to a thrilling 3-2 victory secured in extra time. The almost 40 minutes represented the first time that Adams, McKennie, and Pulisic played together and gave fans a sense of the possibilities. Berhalter’s team still had holes, the balance of the midfielder didn’t seem quite right, but they’d cleared the first hurdle.

Notably, 18-year-old Musah did not appear in either Nations League match. The decision by Berhalter to leave out the multi-national caused consternation in the fanbase. With FIFA’s rules on switching federations more liberal than ever, there was a fear that Musah might reconsider his options after the US passed on a chance to cap-tie him in official competition.

Musah never wavered in his public commitment to the program and looked set to soon take a place in the first-choice team. The teenager’s development at Spanish outfit Valencia happened in fits and starts, but the talent he exhibited in his limited time was undeniable.

When the Nations League ended in June, Berhalter gave Musah a start in midfield in front of Adams in a friendly win against Costa Rica. It was a sign of things to come. However, McKennie didn’t play and the US would choose a different set of players for the coming Gold Cup. The summer tournaments didn’t bring together all of the elements of the group Berhalter would later identify as the strongest midfield core in qualifying.

After Musah missed the September trio of qualifiers due to an ankle injury, it wasn’t until October that the full power of the new group came into effect. The trio started in a comprehensive 2-0 win over Jamaica in Austin, with Musah starring in his ball-carrying role. The group then helped the US to a win over Costa Rica in Columbus six days later. Save for Berhalter’s rotation of the lineup for the 1-0 loss at Panama and the absence of McKennie due to suspension in the 1-1 draw in Jamaica, Berhalter had found the strength of his team. It was in the core.

Adams, McKennie, and Musah are all healthy and ready to go with three massive qualifiers coming over the next week. With the trio all in good form and with ample high-level minutes under their belts this month, the USMNT head coach is in the enviable position of being able to leverage the strength of his core at the perfect time.

There are questions at the front and in the back for a number of reasons. There are no questions in the middle. The core is strong and ready.