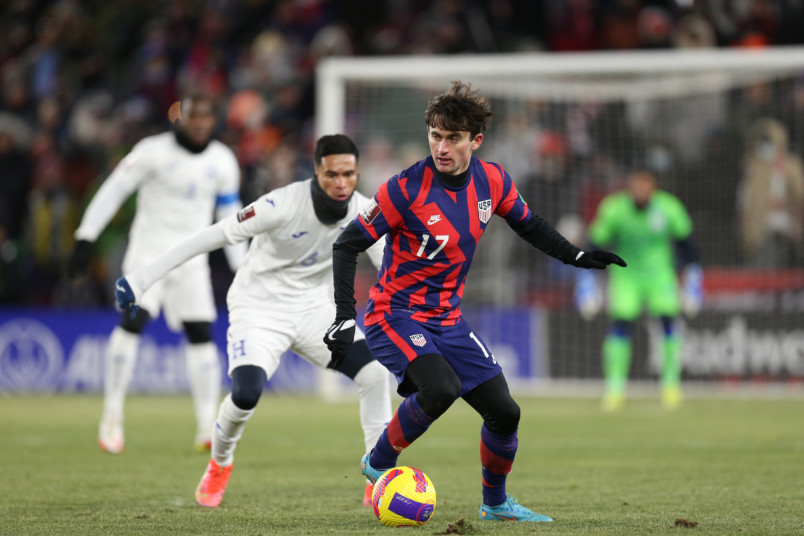 By Jason Davis – WASHINGTON, DC (Feb 4, 2022) US Soccer Players – Luca de la Torre takes his opportunities. That fact was made clear by the 23-year-old midfielder over the last six months when he talked openly about trying to break into the United States Men’s National Team. De la Torre wasn’t shy. He shared with several American outlets the feedback given to him by USMNT head coach Gregg Berhalter. Then he acted on it.

During his one and a half seasons in the Netherlands with Heracles, the San Diego-native has established himself as a dynamic box-to-box force with a knack for driving the ball into the attacking third with his dribbling ability.

Case in point: According to the stats mavens at Opta, De la Torre is in the top twenty in the Eredivisie for dribbles per game halfway through the 2021/22 season. It’s not the kind of stat that will always garner attention. Still, considering USMNT head coach Gregg Berhalter’s quest to build depth in his young, precocious World Cup qualifying squad’s midfield, it’s the kind of stat that should matter.

De la Torre became a talking point among a subset of USMNT fans. They saw a player that could step into the role claimed by Yunus Musah in the last half dozen or so USMNT matches. His ability to drive the ball through the midfield and into the opponent’s defensive third could help open up opportunities for the team’s attackers to get into space and create chances.

A confluence of factors worked in de la Torre’s favor coming into this international window. His continued strong play for Heracles meant he had the type of form that should merit a call-up. Gianluca Busio missed out on participating against El Salvador, Canada, and Honduras because of a positive COVID-19 test. Berhalter needed extra bodies in midfield with a three-game window and the extreme cold in the forecast.

The return to the fold for de la Torre came nearly a year after he last featured for the Americans. Part of that was by choice. De la Torre turned down a Gold Cup call-up to focus on solidifying his roster spot at Heracles. Missing part of preseason could affect his playing time in the Eredivisie, thereby making it tougher to get back in the USMNT via his club form.

The toughest part of the equation, for both player and fan, is that national team rosters don’t follow a set formula. Coaches don’t divulge much about the selection process. While players sometimes get feedback, de la Torre mentioned that Berhalter told him his transition game wasn’t strong enough, it can be decidedly unclear for a player.

Through qualifies in September, October, and November, de la Torre waited. To say that he took his chance when it finally came would be an understatement. Though it waited until the third game of the window, de la Torre rose to the occasion in the Americans’ 3-0 triumph over Honduras on Wednesday night in St. Paul. Playing in a midfield group of himself, Weston McKennie, and Kelly Acosta, de la Torre looked the part.

Berhalter singled out De la Torre for praise in his postgame press conference calling the midfielder his star of the game. That meant getting the spotlight from the man responsible for his immediate national team future.

“Luca de la Torre was the coaches’ man of the match,” Berhalter said Wednesday night. “It’s great when you give a guy like that an opportunity and he takes advantage.”

Viewing de la Torre’s push to get into the team as the attitude of a confident player who simply believes he belongs paid off. De la Torre’s path to the national team wasn’t always clear. It’s only since his rise as a starter at Heracles that he has had the look of a possible national team contributor.

De la Torre was 13 years old when he left California to join Fulham. He spent seven years in London trying to break into the squad as a winger. When his contract expired at the end of the 2019/20 season, he had played just 64 league minutes with the Cottagers as a senior player.

With the move to the Eredivisie, de la Torre proved he could factor in Europe. When Heracles gave him a chance to play in the middle of the field at the beginning of 2021, De la Torre took the strides that would eventually lead him to the national team. Like so many of his peers in the group that is rising together under Berhalter, opportunities come quickly.

It turns out advocating for yourself and proving your worth on the field will eventually get you noticed. While international soccer is never going to be a straight meritocracy, de la Torre showed what confidence can mean over 90 frigid minutes in St Paul.