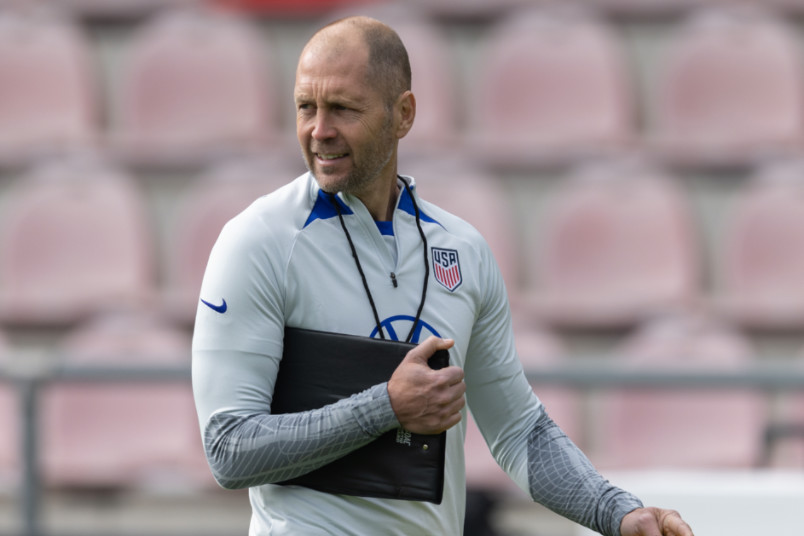 By Jason Davis – WASHINGTON, DC (Oct 26, 2022) US Soccer Players – With the MLS Cup playoffs hitting the final four stage this weekend, 24 clubs have officially reached their offseason. The immediate aftermath of a long MLS campaign that ends in disappointment typically means some postseason training, exit interviews, and goodbyes, some of them temporary, some more permanent.

For others, however, the end of the MLS season means it’s time to start preparing for the rapidly approaching World Cup in Qatar. The timing of this edition of soccer’s marquee event will give MLS players a taste of what European-based players typically experience when the tournament happens in the summer months. In 2022, the Major League Soccer contingent in contention for the World Cup doesn’t get much time to collect themselves before the work to get ready begins.

For the USMNT, that work started again on Tuesday with a fitness camp for USMNT players who have finished their MLS seasons. That starts with a group of nine players joined by a U-20 roster under head coach Mikey Varas. With the camp in Frisco, two of those USMNT players didn’t need to travel.

FC Dallas’s Paul Arriola and Jesus Ferreira saw their season end on Sunday with a 2-1 loss at Austin FC. The playoff run took a young team with a first-year head coach into the conference semifinals. That’s building excitement in Dallas, centering around the club’s attack. Ferreira broke out with 18 goals in 2022. The arrival of head coach Nico Estevez prompted a push higher up the field for Ferriera, where he turned from chief facilitator to chief goal threat for Dallas.

Ferreira earned his way into the USMNT during World Cup qualifying in 2021, developing into a starter for Berhalter at the beginning of 2022. His shining moment came in the Nations League in June when he fired in four of the five goals. The man who scored the fifth goal that day was Ferriera’s FC Dallas teammate, Arriola.

Arriola was another big reason for Dallas’s rise up the table and eventual playoff run. The club spent significant allocation resources to acquire him from DC United. Unleashed by Estevez and connecting with Ferreira, Arriola contributed ten goals and seven assists to the cause in 32 appearances.

The Seattle Sounders also have two representatives in Frisco, Cristian Roldan and Jordan Morris. Roldan wasn’t available during the September window for the USMNT, recovering from an injury in late August that required surgery. However, Roldan returned in time to play in the final three games for Seattle, finishing the season with four goals and five assists. Meanwhile, Morris scored seven times in 29 league appearances to go with his three Champions League goals for the Sounders.

Chicago Fire goalkeeper Gaga Slonina arrives in Frisco after keeping 12 clean sheets in 32 starts in his last season in Chicago. Slonina signed with Chelsea in August.

Aaron Long helped the Red Bulls return to the playoffs for the 13th consecutive season, the longest active streak in MLS. Long was massive as an experienced leader anchoring the back line of the youngest team in the league. For Long, 2022 was also a comeback season. The former MLS Defender of the Year ruptured his Achilles tendon in May of 2021 and missed the rest of the campaign.

The time in Frisco will give Long a chance to work with fellow center back Walker Zimmerman. Zimmerman posted a strong season with 30 appearances and more than 2,500 minutes in Nashville SC’s back line. Despite the disappointment of a first-round playoff exit to the Galaxy, Zimmerman and Nashville continued their run of making the playoffs in every season since joining the league.

Zimmerman will be joined in Frisco by linemate Shaq Moore, the 25-year-old fullback who joined Nashville midseason via transfer from Tenerife. Moore stepped into the national team in an emergency situation back in March and did good work on short notice in games against Panama and Costa Rica. He played 11 regular season games for Nashville after the move.

The most experienced player in Frisco will be DeAndre Yedlin, the only of the nine to have played in the World Cup. Yedlin went to Brazil in 2014 as a 20-year-old, now a veteran of 75 caps and stints in the Premier League and Turkey’s Super Lig.

In 2022, Yedlin returned to MLS and joined Inter Miami. One of the most consistent performers in a season that ended with Miami in the postseason, Yedlin played all but 76 minutes of the club’s regular season.