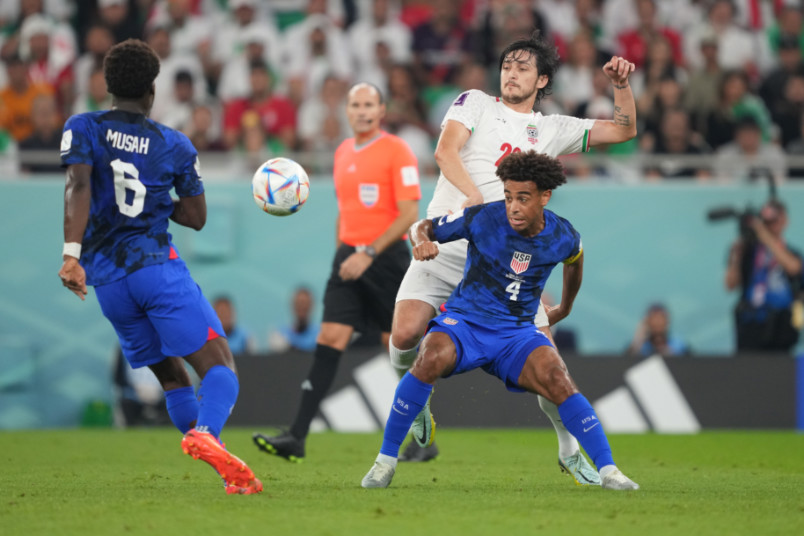 By Jason Davis – WASHINGTON, DC (Nov 30, 2022) US Soccer Players – Tournament soccer is a particular kind of problem. With a premium on getting the results needed to advance, how those results happen is not much of a concern. Everyone would like to score lots of goals and win going away. However, goals can matter when it comes down to tiebreakers. The first priority is always the points. A narrow 1-0 victory earns the same amount of precious points toward group-stage advancement as a comprehensive 3-0 win.

With that in mind, group B at the 2022 World Cup played out in a fascinating fashion, reinforcing conventional wisdom and giving us a few things to consider moving into the round of 16.

After seeing off Wales 3-0 on Tuesday, England topped the group with seven points. The USMNT beat Iran 1-0 on a Christian Pulisic goal to move on with five points from three games. Iran finished third with three points, with Wales fourth on one point. Here’s what we learned from World Cup group B.

Together, the two teams advancing to the round of 16 from Group B conceded a total of three goals in group stage play. England gave up two goals to Iran with the game already out of reach, while the Americans gave up a solitary goal from a penalty in the group stage opener. The success of England and the Americans is attributable to their structures, but those structures needed high levels of individual play to work as well as they did.

England’s Gareth Southgate and the USMNT’s Gregg Berhalter changed their approach through the group stage for the challenge presented by three very different opponents.

England was up 4-0 when Iran scored on an incredible bit of individual play by Mehdi Taremi in the 65th. Iran’s other goal came from a penalty 13 minutes into stoppage time. England allowed a single shot on target against the US in a 0-0 draw, doing the same against Wales for a 3-0 win in the final group-stage game.

After the draw with Wales, the USMNT kept England and Iran from scoring over the next 180-plus minutes. The USMNT didn’t allow a shot of any kind by Iran in the first-half of Tuesday’s win and allowed just four with one on target in the second-half.

Standouts for both teams rank among the best defenders in the tournament so far. England’s Harry Maguire has been a rock for England. The Americans need to look no further than Tim Ream, a player who has played every available minute of the tournament, for a reason for its success. Berhalter was able to turn to other defensive options along the back line during the group stage with no drop off in quality.

Defending is more than just center backs, despite their key role as the line of defense. Any assessment of England and the USMNT that doesn’t include mention of the teams’ respective defensive midfielders, for England Declan Rice and for the United States Tyler Adams, would be incomplete.

Adams’s play has garnered praise from all corners. The 23-year-old captain of the USMNT will leave the tournament primed for a big future, no matter the outcome of Saturday’s Round of 16 clash with the Netherlands.

Both the US and England defended well, but neither sat deep and invited pressure as a rule. Trusting the strength of their respective midfield and defenders while also asking forwards to be part of a collective defensive effort, both teams maintained a steadiness that paid off via advancement.

The Americans reverted to a defend-first mentality in the final minutes of the win over Iran out of necessity, subbing on a third center back to deal with a barrage of crosses. The circumstances, with American legs tiring and the round of 16 beckoning, pushed Berhalter to choose pragmatism over a more aggressive approach.

That stretch aside, neither of the top two teams relied heavily on defending with large numbers to secure points. Applying pressure with the ball and pushing up the field, then working to win the ball after turnovers, helped them go through.

Southgate and Berhalter trusted their players to play both sides of the ball rather than set them up to limit their opponent first. Meanwhile, both Wales and Iran opted to defend deep and try to score goals on the counterattack. The results speak for themselves. Wales scored a single goal from a penalty, while Iran didn’t score with the game in the balance against either England or the United States.

Southgate started an unchanged team in the first two group games against Iran and the USMNT, then made four changes against Wales when England’s progression was all but assured. Berhalter fielded the same starting lineup in nine of eleven positions through all three group-stage matches, with two spots seeing changes in different matches.

After starting Josh Sargent at center forward against Wales in the opener, he went with Haji Wright against England in the second match. Sargent returned to the starting lineup against Iran. Cameron Carter-Vickers stepped into a center back spot in the group finale, with the man who started the first two matches, Walker Zimmerman, entering as defensive support late in the match.

With the high stakes, coaches in major tournaments typically stick with the same core of players whenever possible. Barring injury, messing with what works isn’t usually a good idea. Change only happens when problems present themselves, when a coach has no choice but to make a switch, or when a team mostly assured of advancement has the luxury of rotating. Confident teams don’t need to alter the recipe, regardless of the approach the opponent might take.