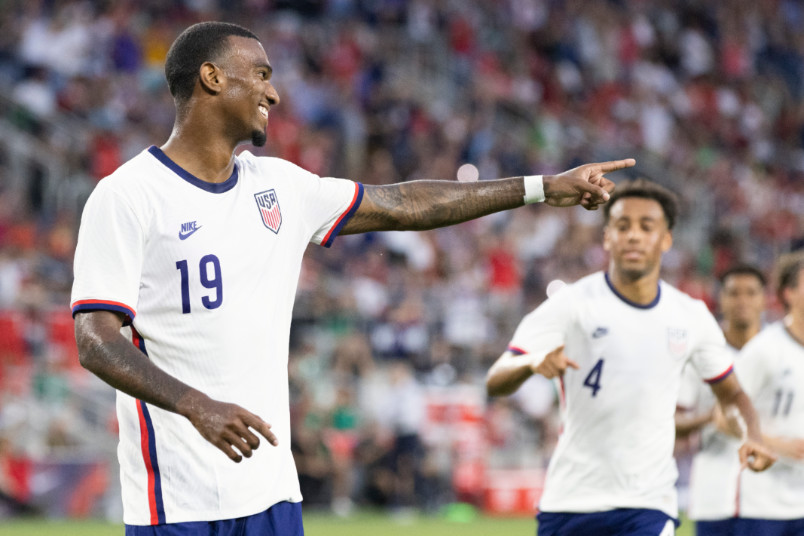 By Jason Davis – WASHINGTON, DC (Dec 30, 2022) US Soccer Players – World Cup years are not often ones for experimentation. Coaches looking to solidify their squads for the tournament after nearly four years of preparation prefer to have most of that work out of the way by the time the World Cup year arrives. It’s rarely a time to talk about “firsts” when the climax of the cycle looms in the near future.

In the case of three players who earned their first USMNT caps in 2022, it was more about players earning their chance. Malik Tillman, Haji Wright, and Joe Scally made their national team debuts in a World Cup year because head coach Gregg Berhalter recognized their ability to help the team. For Tillman, breaking into the USMNT picture meant laying the groundwork for a bright international future. For Wright and Scally, it meant earning a spot on the roster for the World Cup itself.

Tillman is just 20. He fits naturally into a new generation of national teamers at the beginning their professional careers. It’s easy to see why Berhalter chose to call up Tillman in June for a set of games that included friendlies against Morocco and Uruguay. A rangy midfield with a strong set of technical skills, Tillman checks all of the boxes for a central midfielder in Berhalter’s preferred 4-3-3 formation. During his time coming through the Bayern Munich system, Tillman played in a number of positions, showing a versatility that will be an asset for both club and country.

Against Morocco in his first national team appearance, Tillman played 26 minutes in a 3-0 win as a substitute for Christian Pulisic.

At the time of his call-up into the USMNT, when Tillman filed his one-time switch with FIFA to commit himself to the United States, the midfielder was still working to get consistent senior-level minutes. Bayern Munich believed in his talent, but with places at Germany’s top club tough to come by, he needed a place to play.

Just over a month after his USMNT debut, Tillman joined Rangers of the Scottish Premier League on a season-long loan. His play there in the early stages of the season, including appearances in the Champions League, only reinforced Berhalter’s interest in the young player.

Tillman went to appear in both of the USMNT’s pre-World Cup September friendlies, a 2-0 loss to Japan and a goalless draw with Saudi Arabia. With Scotland’s top flight back to play after the World Cup, Tillman has picked up where he left off before the break. He scored the third goal in a 3-0 Rangers win over Motherwell on Wednesday.

24-year-old Wright made his debut for the senior team in the same friendly that introduced Tillman to the squad. A halftime sub against Morocco, Wright converted a 64th-minute penalty kick to cap the 3-0 win and add a first goal to go with his first cap. That reunited Wright with several of his former USYNT teammates, Pulisic included.

Wright’s club career took him from the New York Cosmos to Schalke in Germany, where he trained alongside Weston McKennie and Nick Taitague. A stop in Holland preceded a move to Scandinavia and SønderjyskE in Denmark.

The striker’s form in Turkey earned him his national team call-up. Wright was flatly prolific in the Turkish Super Lig after his move from SønderjyskE. Acquired by Antalyaspor on loan for the 2021-22 season, Wright scored 14 goals in 32 appearances, averaging .66 goals per 90 minutes. That was more than enough to get him on the national team’s radar during a period when injuries and circumstances conspired to create a significant need at the striker position for the USMNT.

Antalyaspor made his move to Turkey permanent before the campaign, purchasing Wright outright from SønderjyskE and signing him to a three-year contract. Wright kept up his scoring form, putting in nine goals in 14 starts and just over 1,200 minutes, numbers that maintained his .66 goals per 90 minutes output.

In Qatar, Wright played in all four American matches, including a start against England in the second group stage game. He scored the USMNT goal off the bench against the Netherlands in the 3-1 round of 16 loss.

For Scally, versatility and a quick adaptation to the rigors of the Bundesliga brought about a swift rise into the national team picture. The fullback joined Borussia Moenchengladbach of Germany’s top flight from New York City FC after the 2020 MLS season and was slotted immediately into his new club’s lineup rotation.

Scally made 30 appearances in his first season at senior level in 2021-22, a heady achievement for a player just past his 18th birthday. It wasn’t just his rapid move into meaningful minutes for one of Germany’s big clubs that turned heads, however. Scally also showed an ability to play on both sides of the field without a drop in performance.

The story for the NYCFC product was a common one: Rushed into action in part because of injuries at the club, Scally won a permanent spot in the lineup by putting in quality games week in and week out. His success in Germany helped Scally get a call-up to the November 2021 World Cup qualifying window for games against Mexico and Jamaica. He dressed but did not play for the match in Kingston.

Scally earned a call-up to the USMNT for the Morocco friendly and entered the game at the start of the second half to earn his first cap. He would go on to play in friendlies against Uruguay in June and Saudi Arabia in September ahead of the World Cup in the fall. Locked into a starting role in the Bundesliga to begin the 2022-23 Moenchengladbach season, Scally carried a good run of play and sharpness into the World Cup selection period.

Berhalter’s decision to take Scally to Qatar made the fullback the youngest player on the American roster at 19. Despite not getting on the field for the World Cup, that faith, and Scally’s excellent start to life in the Bundesliga, bode well for a successful national team future.