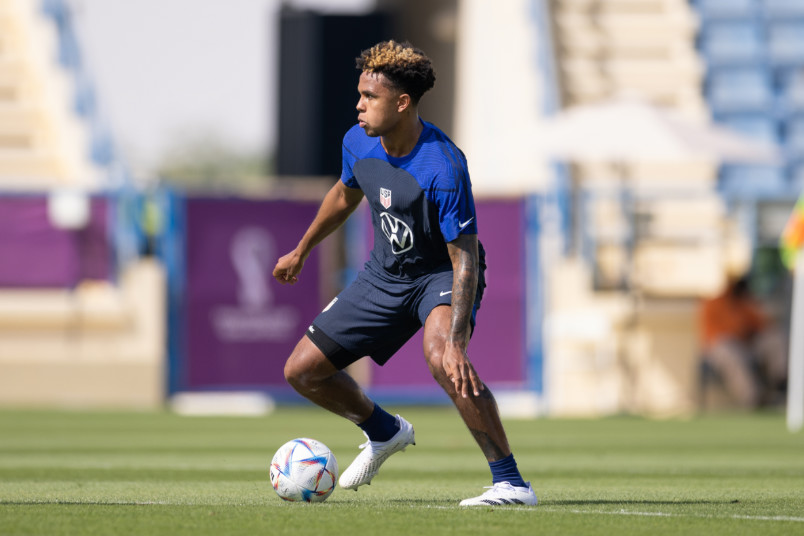 By Luis Bueno – RIVERSIDE, CA (Nov 9, 2022) US Soccer Players – When the USMNT lines up against Wales in the teams’ opening match on Monday, there won’t be anything new as far as the midfield is concerned. US coach Gregg Berhalter selected seven midfielders who contributed greatly to the team’s World Cup qualifying efforts. While there will likely be just three starting spots filled by midfielders, the squad’s entire unit seems strong enough to chip in and come through for the team.

Like the rest of the roster, the midfield unit is filled with youth and promise. Ages range from 19 (Yunus Musah) and 27 (Cristian Roldan, Kellyn Acosta), and the promise has been fulfilled in some areas. While none of these players have competed at the World Cup, everyone in this group competed in qualifying and has at least ten international caps.

That promise came through during World Cup qualifying. During the United States’ successful campaign, the midfield was a source of strength and stability. While the unit did not account for many goals during the 14-match campaign, it was not necessarily called on for finishing. What the players did provide, though, was that stability necessary to set a foundation to build on.

Overall, the group offers cohesion and stability. During World Cup qualifying, only four starting midfield spots were claimed by players who ultimately did not make the World Cup roster. Berhalter was able to count on a solid rotation that ultimately also formed the base of this roster.

Lining up in a familiar 4-3-3 formation, the team started with a rotation that featured players who showed up and competed nearly every time out. Two of the seven midfielders, Tyler Adams and Kellyn Acosta, appeared in 13 of the 14 qualifiers. Adams started 12 of the matches and came off the bench in another, while Acosta had six starts and seven substitute appearances.

In Acosta the US has a player who appeared 21 times in 2021, the most appearances by a USMNT player in one year since 1994. Acosta also has recent success at a high level as he scored a goal in LAFC’s MLS Cup triumph over Philadelphia on November 5.

Adams and fellow club teammate Brendan Aaronson offer a different level of cohesion as both compete for Leeds United in the English Premier League. The duo started alongside each other twice during qualifying but have started alongside one another in 13 of Leeds’ 14 Premier League fixtures this year. Adams was suspended one match due to a red card.

Still, the two players who appeared the most times together in the midfield were Adams and Musah. The duo started eight times together during qualifying as well as the last game that counted, a June Concacaf Nations League fixture against El Salvador.

Adams and Weston McKennie started six times together. While Acosta is the most-capped player in the US midfield with 53, McKennie is second in caps with 37 and has scored the most goals among the midfielders with nine. During qualifying, the midfield contributed three goals, with McKennie collecting two of them against Honduras and Mexico.

Of the listed midfielders, the player who started the fewest times during qualifying was Roldan, who did not start in any of the 14 qualifying matches but came off the bench five times. Roldan though is not exactly inexperienced internationally, playing 32 times for the United States. Additionally, he was a key part of the Seattle Sounders’ run to the Concacaf Champions League title earlier this year.

24-year-old Luca de la Torre went three years between his first and second appearance in a US jersey. His second cap came in March 2021 when the USMNT beat Jamaica in a friendly played in Europe. During qualifying, de la Torre started twice and came off the bench two more times.

Perhaps where the team can also gain a bit of an edge is in familiarity with the rivals. All but three of Wales’ roster competes either in England or Wales, and one of those is Acosta’s LAFC teammate in Gareth Bale. England meanwhile features a roster that, save for one player, exclusively competes in England. Adams and Aarsonson have an advantage in terms of insight and recent experience.

The trio that started the most during qualifying was the combination of McKennie, Adams, and Musah with three. McKennie, Adams, and Aaronson started twice together. Still, that is a relatively small sample size. Factors such as club form, injury, suspension, travel were possible factors that went into lineup selection that won’t play as much or any role come next week.

If recent results mean anything, Berhalter featured two different midfield looks in the most recent official matches in the Nations League. Against Grenada on June 10, Berhalter turned to Acosta, McKennie, and de la Torre with Aaronson and Roldan coming off the bench. Four days later against El Salvador, Berhalter turned to Aaronson, Adams, and Musah. Whatever direction Berhalter goes in, he will have a youthful but experienced group to choose from.