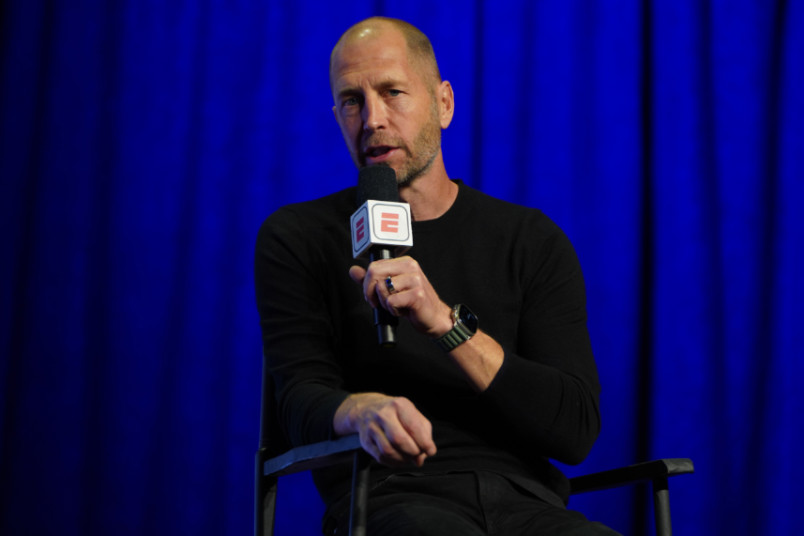 By Jason Davis – WASHINGTON, DC (Nov 10, 2022) US Soccer Players – On Wednesday in Brooklyn, 26 players joined the illustrious group of Americans that have earned the chance to represent the United States on the biggest stage in sports. With the World Cup kicking off on November 20 and the USMNT’s group stage opener against Wales scheduled for the next day, the moment arrived for head coach Gregg Berhalter to call up the final team of what has been a long four-year cycle. This is it. The stakes don’t get any higher than this.

Berhalter’s group represents the young talent that carried the Americans to qualification in Concacaf, with a few slightly older players mixed in for good measure. 25 of the 26 will play in their first World Cup in Qatar. With the trip to Qatar only days away and the first US game at the tournament in more than eight years just a few days after that, Berhalter made a statement that embodies the next challenge for the Americans.

“There is, in my opinion, a difference between qualifying in Concacaf and playing in the World Cup,” he said.

While seemingly obvious, Berhalter’s comment, one meant to help explain some of the difficult roster choices he made, goes deeper than the superficial reality that the level of play will be higher in Qatar. At the World Cup’s intense pace and controlled environment, the strong team spirit that runs through this group should be an asset. Berhalter’s spent three years building a culture that makes it more than just 26 players brought together for a tournament.

There won’t be any air travel in Qatar. The US team will take up temporary residence at one of the best training bases in the country and won’t want for anything. Leaning into the fact that these players have taken ownership of directing the success of the United States in international soccer, the Americans couldn’t ask for a better platform.

The core of the group remains intact and, thankfully, appears healthy and ready to go. Call it luck or good timing, but a healthy squad was never a sure thing. A defining feature of the buildup to this tournament has been the growing list of injuries that will keep top players from participating. It’s a not-insignificant advantage not to be missing any key players.

The US isn’t fully healthy. Miles Robinson and Chris Richards were unavailable due to injury. Still, the USMNT is in better shape than many countries heading to Qatar.

The list of fully healthy players includes Giovanni Reyna, a figure who missed most of qualifying. Never a doubt for the team if available, Reyna will go to the World Cup with a string of strong club performances leading into the tournament.

We’ll see Brendan Aaronson and Tyler Adams, club teammates at Leeds United, play in the World Cup together. Aaronson and Adams have taken the Premier League by storm as part of Jesse Marsch’s squad and represent the power of Major League Soccer academies to develop players who can star at the highest levels. Weston McKennie, Haji Wright, Joe Scally, Tim Weah, and Reyna all have some connection to MLS academies.

This US World Cup squad includes players based in nine leagues from nine countries. All five of Europe’s top-rated competitions are represented in addition to the Scottish Premier League, English Championship, and Turkish Super Lig. The American player ranges far and wide. Few nations at the tournament in Qatar will include a similar variety of club resumes.

The question of expectations looms for Berhalter and his group. Zeroing in on what is possible, or what is fair to expect, is a nearly impossible task considering the unique circumstances at play.

Undeniable, potentially transformative talent could push the Americans to new heights on the world stage. The group is difficult, and the first match against Wales on November 21 feels crucial for the team’s fortunes. The Black Friday match-up against England has a chance to be one of the most-watched USMNT games in history. A showdown with Iran, 24 years after the two teams met at France ’98, is set for November 29.

Berhalter knows what it takes to succeed at the World Cup and serves as a link to the best modern finish for an American entry at the tournament. The current USMNT boss started at center back for the team that reached the quarterfinals in Japan and South Korea in 2002.

That group shocked the world with an upset win over Portugal to start the tournament and beat Mexico on the way to a quarterfinal appearance. Unheralded players from a generation still working to make forays overseas snuck up on the soccer establishment under head coach Bruce Arena.

The current version of the USMNT won’t be able to sneak up on anyone. Too much of the team headed to Qatar is known around the world thanks to their exploits in competitions like the Champions League. The bar for the USMNT is higher than ever before.

That’s a credit to Berhalter and his playing contemporaries and to the talent emerging from the United States in the present day. Whatever the practical challenges facing the group at the World Cup, the American roster speaks to the potential of the United States as a soccer nation.