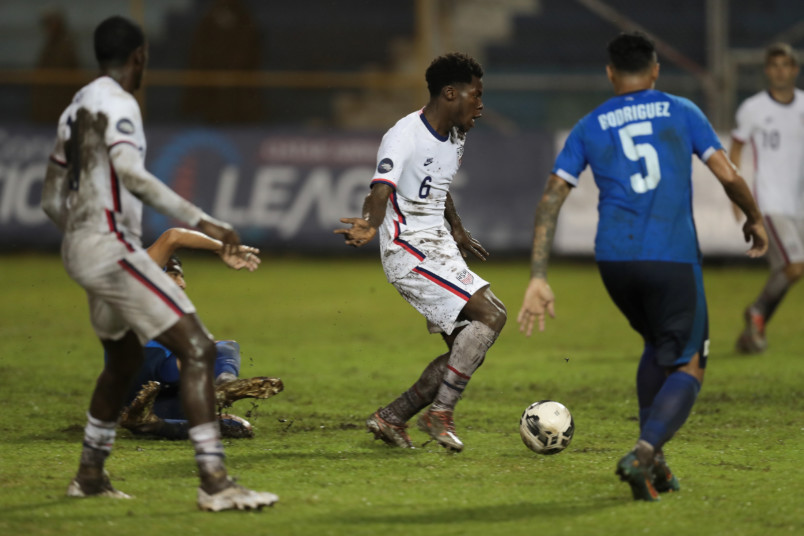 By Charles Boehm – WASHINGTON, DC (Jun 16, 2022) US Soccer Players – It was wet, humid, and muddy, and Yunus Musah was playing his third game in 14 days at the tail end of a long club season. The USMNT were trailing 1-0 thousands of miles from home as the clock ticked down on the second-half. An upset was in the making for the home crowd. The center of the rain-soaked pitch under his feet was rapidly dissolving into mud with just over half an hour left to play.

Yet Musah still had the wherewithal to pick up a square pass and accelerate between two converging El Salvador players and into the open field despite the choppy turf. His speed and directness once again set the home side’s defense backpedaling. He knocked the ball wide to Tim Weah, who threaded a return pass to his feet in the penalty box. A couple of quick touches set him up to finish a sure golazo, only for Mario Gonzalez to deny him with a superb reaction save at close range.

Musah’s hands flew up to his head in frustration as the would-be equalizer vanished. But he and his midfield mates kept going, even after a harsh straight red card on Paul Arriola reduced the USMNT to 10 men. A few minutes later, Weston McKennie embarked on a similar solo surge forward, with the USMNT pressing for an opening

Soon it was Musah’s turn again. The Valencia starlet sniffed out a turnover in the defensive third and raced away to spark a counterattack. Finding Jesus Ferreira’s feet, he continued his run, speeding after Ferreira’s one-two pass behind the back line. Ronald Rodríguez had to foul him to prevent a one-on-one with Gonzalez, earning a red card that helped turn the game’s tide.

“I was a little bit hesitant, just thinking about his skill set and how that was going to work today,” said coach Gregg Berhalter of Musah post-game. “But he took advantage of the dribble for sure, under poor field conditions, sometimes that can slow you down, and he was tremendous today. If there was a man of the match, we’d probably give it to him because of his performance … he did a great job.”

A little over 10 minutes later, another center mid, substitute Luca de la Torre, delivered a pinpoint cross onto Jordan Morris’s head for a stunning late leveler. A 1-1 Concacaf Nations League away draw had been snatched from the jaws of defeat, pushing the United States into pole position in the Group D standings. More importantly, it sealed a night of resilience and resistance from the Yanks with just a few months to go until the World Cup.

There’s an argument that central midfield has generally not been an area of overwhelming strength for the USMNT over the decades. The domestic development pipeline has long shown a capacity for churning out solid holding mids. Yet incisive play makers and ball-progressing #8s, the kinds of players who control the engine room and set a match’s tempo, have often been in limited supply. It was part of why Bob Bradley often used the proverbial “empty bucket” shape. It could also be detectable as an undertone in Jurgen Klinsmann’s mixed results at fostering a more “proactive” style.

Today, the center of the park has become one of the team’s biggest weapons. The “MMA” trio of McKennie, Musah, and Tyler Adams was the foundation of the successful Concacaf Octagonal qualifying campaign. Their speed, range, bite, and personality beyond their years made the USMNT fiendishly difficult to play against for much of the road to Qatar. De La Torre added to the depth and variety with his climb into a pivotal place on the roster. And at the start of the June window, Berhalter showed another option, deploying Brenden Aaronson centrally after using him mostly in wide positions during the Ocho.

That last part was part of a wider shift in the USMNT build-out, what Berhalter called a 3-2-2-3 shape in possession. Others might categorize it as “flipping the midfield triangle” from a #6 and two #8s to a “double pivot,” or twin #6s behind a #10. In the final stages of the El Salvador game, we saw something more like a 3-5-2 formation.

The point was to test out subtle differences in roles and spacing to unleash Christian Pulisic and the rest of the attack without unduly exposing the back four. Eventually, all this may allow the coaching staff to shoehorn more of their most highly-rated players into the XI.

“That’s part of the idea of making space in a pocket for a guy like Christian, but also giving help to guy like Tyler in buildup,” explained Berhalter on Monday. “We’ll see. We want to continue to work on that, we think against a certain type of opponent it could be an impactful way to create those spaces. And we’ll continue to push forward and see how that works.”

The coach seems to be looking ahead to the possibility that mastery of ball possession may be more difficult to attain at the World Cup than it was in Concacaf play, while threats in transition remain. That will likely require more precision and efficiency with the ball and careful attention to defensive shape without it. With Musah and de la Torre showing the potential to adapt to the responsibilities of a deeper-lying midfielder, June’s action brought a greater sense of fluidity.

“I think I’m comfortable doing either job,” said de la Torre after his outstanding performance in last week’s 5-0 Nations League win over Grenada. “I like to have the freedom to kind of see what the other team is doing and decide for myself whether to be higher or lower.”

As impressive as MMA has been over the past year, adding de la Torre and Aaronson to the mix hints at additional flexibility. It’s also an extra layer of scouting difficulty for adversaries.

“He’s a guy that is really fitting in nicely to what we’re doing, and really is carving out his role, whether that’s as a starter or a guy that can come in and impact the game from an offensive standpoint,” said Berhalter of de la Torre. “Luca had an excellent camp, good carryover from a disappointing end to his (club) season. But he really picked up and performed well this camp.”

So much of the recent discourse outside the team has revolved around questions about the depth chart at striker and goalkeeper. Perhaps it’s more encouraging to consider that this month showcased how far along the USMNT’s central-mid evolution has progressed.

“We’re still learning. We want to see how it affects potentially other defensive shapes, and how we can still create spaces both between the lines and in wide areas, lower wide areas,” said Berhalter. “So we’re going to keep working on that type of thing.… it’s just, I think, about recognizing what type of pressure (we face) and recognizing the best formation to give us quick ball circulation and open up spaces between the lines.”