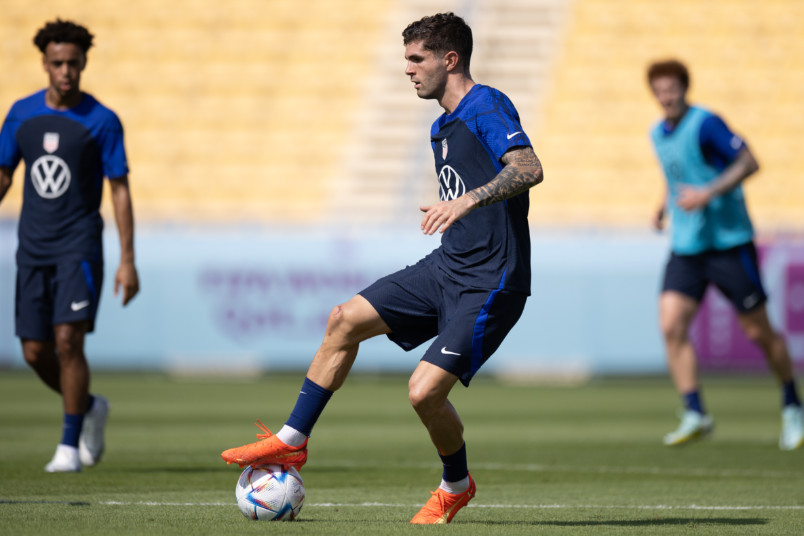 By Charles Boehm – WASHINGTON, DC (Nov 17, 2022) US Soccer Players – One of the central topics around the USMNT during the 2022 cycle is its markedly youthful nature. It’s the second-youngest among the 32 teams at the 2022 World Cup. Perhaps nowhere on the pitch is that generational shift more evident than in the forward corps selected by coach Gregg Berhalter.

Talent abounds in this group, which has an average age of just 23. Only one member of the septet, 28-year-old Jordan Morris, is older than 24. That doesn’t automatically equate to inexperience. Christian Pulisic carries 52 international caps, followed closely by Morris’s 49. Thanks to the conscious efforts of Berhalter and his interim predecessor Dave Sarachan, the likes of Josh Sargent and Tim Weah have already amassed significant national team minutes over the past several years even as injuries and other issues limited their availability.

Both the storylines and skill sets are diverse here. Some of these attackers are already household names. For a few, their fathers’ career exploits put them under a different kind of spotlight from an early age. Most will be quite familiar to USMNT supporters from their contributions to World Cup qualifying and the Concacaf Nations League title run that prefaced it. Others could be said to have made late runs to book their tickets to this tournament.

Jesus Ferreira became a regular as the Octagonal road approached its completion, then used subsequent friendlies and Nations League games to build his case for the starting #9 job. The FC Dallas academy product played multiple attacking roles as he climbed into FCD’s first team. He then made a breakthrough as an out-and-out frontrunner in 2022, earning MLS All-Star, Best XI, and Young Player of the Year honors while racking up 10 of his 15 career caps in this calendar year.

Berhalter has praised Ferreira’s nuanced interpretation of the 9 role, noting his ability to read space and set up teammates with his passing and movement. Meanwhile, Josh Sargent and Haji Wright offer something of a more traditional spearhead’s toolkit, happy to run in behind opposing back lines, fight aerial battles with center backs, or offer a reference point with their backs to goal.

With nine goals apiece for Norwich City and Antalyaspor, respectively, that duo are neck and neck atop the goalscoring chart for Yanks in Europe and arrive in midseason form from their club campaigns. Finishing chances with efficiency will be paramount in Qatar.

While he was a star in the US youth national teams system as a teenager, Wright’s hunt for a stable home in Europe took him to several destinations across the continent from 2017-21, limiting his USMNT involvement to three caps so far. Sargent had a comparable set of trials and tribulations with Werder Bremen and Norwich. This year he found his footing, and then some, in the rough and tumble of the English Championship, where he’s faced off with many members of Group B rivals Wales and England.

Berhalter has options, with several of the wingers and playmakers in the forward group also able to handle the position’s duties and would offer a new wrinkle for opponents to consider.

After each dealt with their own versions of frustrating injury challenges at various periods in the cycle, Pulisic, Weah, and Gio Reyna are fit and firing in time for the World Cup. Quick, skilful, unpredictable, they appear to be the leading contenders to work in the wide areas. All three have shined under the bright lights of elite competitions like the UEFA Champions League, Europa League, Ligue 1, the Premier League, German Bundesliga. As massive as the next month is be for any player, they have spent much of their young careers preparing for moments like this.

Morris might be considered the wild card of this group. A fast, hard-working player who overcame two torn ACLs to reach this point, he can lead the line as a striker and has also played as an inverted left winger with a nose for goal. Brenden Aaronson logged ample time on the flanks during qualifying. He’s been technically categorized as a midfielder on this squad. At the roster unveiling event in Brooklyn earlier this month, Berhalter explained that this is because “we’re a little light in midfield, so we think he can do a number of things for us.”

Which brings us to another key tactical matter for the USMNT. Through most of the qualification process, Berhalter used an aggressive 4-3-3 formation with a single defensive midfielder behind twin #8s. In the June camp, he tried out some adjustments to the engine-room trio that looked more like a 4-2-3-1, with the idea of dropping Yunus Musah or his equivalent deeper to provide support for usual holding mid Tyler Adams. That relationship inevitably has a knock-on effect for the front line.

Deploying two deeper center mids tends to make the third and most advanced member of that triangle more of a #10. That player can also press high and be more disruptive to opponents’ possession buildups. The question of which shape and what personnel are best for it will also hinge on the adversary. Wales is expected to sit deeper and rely on counterattacks. England will probably aim to dominate possession and push the USMNT into their own end of the field. Iran look to keep organized and compact with plenty of numbers in midfield and tidiness on the ball.

Monday’s group B opener vs Wales at Ahmad bin Ali Stadium in Al Rayyan will mark the first-ever steps onto the World Cup stage for everyone in this forward group. They are confident that they are ready for it.