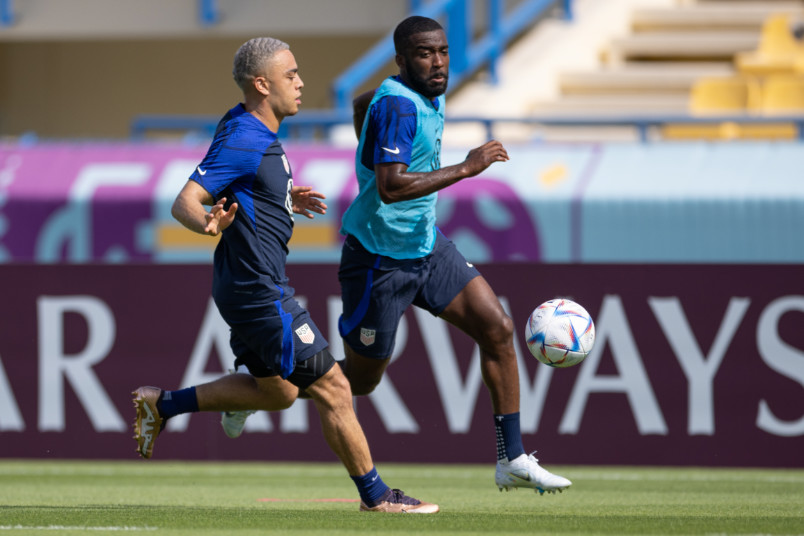 By Jason Davis – WASHINGTON, DC (Nov 16, 2022) US Soccer Players – The USMNT is just days away from kicking off its 2022 World Cup campaign. On the ground in Qatar, preparing for its opening group stage match against Wales on Monday, head coach Gregg Berhalter is putting his players through a final set of training sessions. Regarding readiness, there’s not much more he could have asked for.

Across the back line, Berhalter has a group of fit, in-form players ready to backstop the Americans in their quest to advance through the tournament in Qatar. It’s a varied group, with each player taking a unique path to the national team and to the world’s biggest soccer stage. The team counts three products of America’s college soccer system at center back and one player who earned his way into the team via a very British journey.

Walker Zimmerman spent his college years at Furman University in South Carolina, a small school with a surprisingly rich soccer history. Clint Dempsey and Ricardo Clark played together with the Paladins in the early 2000s. After starting his career in Texas, FC Dallas traded Zimmerman to LAFC ahead of the 2018 season. In LA, Zimmerman played a key role in the club’s record-breaking 2019 season and earned his first MLS Best XI recognition. He would go on to repeat that feat in 2020, but with a new team.

Nashville SC is where Zimmerman added his name to the list of the best defenders in MLS history. Navigating the first season with his second expansion team in three years, Zimmerman anchored Nashville’s back line and took home Defender of the Year to go with his Best XI award. He won the Defender of the Year award again in 2021 and joined Carlos Bocanegra and Chad Marshall as the only players to accomplish that feat.

Joining Zimmerman in the center back core is a man whose college-to-USMNT journey took a few extra stops. Aaron Long played college soccer at UC Riverside, drafted by Portland in the second round in 2014. A college midfielder,

Long moved from the Timbers to the Sounders to the New York Red Bulls between 2014 and 2016. He won the USL Defender of the Year Award that first season in New Jersey, playing for Red Bulls II. In 2018, he took home MLS Defender of the Year honors. Going from an aspiring pro in search of a home to the recognized best defender in the top domestic league in three years is an incredible achievement. After a year missed due to a ruptured Achilles injury, Long is fully healthy and a candidate for a big role in Qatar.

The most seasoned professional in the center back group is another product of the college soccer system. St Louis native Tim Ream did what a lot of good high school soccer players from St Louis do. He matriculated to St. Louis University to play for the highly regarded Billikens program. After four years with SLU, the Red Bulls picked Ream in the second round of the 2010 MLS SuperDraft.

Two years later, he joined Bolton via transfer and moved to Fulham in 2015. What he’s done since, in both the English Championship and the Premier League racking up nearly 400 appearances, represents one of the great European careers of any American defender. Now 35, Ream will play in his first World Cup on one of the best runs of form of his career.

Cameron Carter-Vickers rounds out the center back quartet and is the only one not to have played college soccer in America. Instead, Carter-Vickers grew up playing in the English youth system. He joined Tottenham at 11 and eventually earned a senior contract. A series of loans followed, sending Carter-Vickers to Sheffield, Ipswich, Swansea, Stoke, and Bournemouth.

The youngest of the center backs at 24, Carter-Vickers is now permanently signed with Celtic of the Scottish Premier League. Following a loan move to the club last season, he established himself as one of the Premiership’s top defenders and secured a transfer to the Glasgow giant.

The US team for Qatar also includes five fullbacks. Two are products of MLS academies. Two moved up through European systems in the countries of their birth. Another navigated an unusual path from Georgia to Spain to MLS.

Yedlin parlayed his rise in the USMNT back in 2014 into a transfer to Tottenham. After a season with Sunderland, he spent five seasons with Newcastle before finishing his European run with Galatasaray in Turkey. He returned to MLS in 2022 and helped lead Inter Miami to the playoffs as one of the club’s most consistent performers.

The youngest of the fullback group also came up through an MLS academy. NYCFC product Joe Scally garnered attention almost immediately upon signing a homegrown contract and transferred to Borussia Moenchengladbach on his 18th birthday. Since arriving in Germany, Scally has established himself as a regular for Gladbach. Scally has lined up on both the left and right in Germany, a versatility that might come in handy for the US in Qatar.

The pair of European-developed fullbacks are Sergino Dest and Antonee Robinson. Dest, a Dutch-born player who came through the famous Ajax setup, is on loan with AC Milan from Barcelona. He established several firsts during his time in Spain, including becoming the first American to play in El Clasico and to win a domestic trophy in the country. At 22, he’s hitting his prime in his first World Cup. Dest decided to represent the US despite the Dutch national team recruiting him to play for the nation of his birth.

Robinson worked through Everton’s system, eventually debuting at the senior level on loan to Bolton in 2017-18. He then played a season on loan to Wigan Athletic before signing with them in 2019-20, transferring to Fulham for the 2020-21 season. A key part of the club’s promotion campaign last season, he’s the regular on the left side of the Cottagers’ back line. Robinson is a modern player with the ability to cover the whole of the flank and contribute significantly to the attack.

Shaq Moore is that as well, but on the other side of the field. Moore moved to Nashville SC this past summer after an unusual (for an American) journey to Spain to start his professional career. Moore grew up in Georgia but found the best chance to reach his dreams via a move to Levante in La Liga.

Moore spent a season with Reus in Spain’s second division, then three seasons playing for Segunda side Tenerife. A seven-figure move to Nashville paid immediate dividends for both the club and Moore and now the 26-year-old is set to play in his first World Cup.