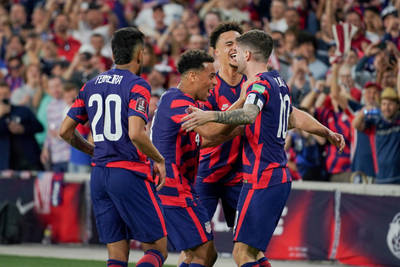 The USMNT will enter the final matchday of the Octagonal round of Concacaf World Cup qualifying with a three-point lead and a sizable goal difference for an automatic spot. Christian Pulisic lead the United States to a 5-1 win over Panama in Orlando on Sunday night, converting two penalties and finishing off a hat-trick. Pulisic opened the scoring from the spot in the 17th with Paul Arriola . . . 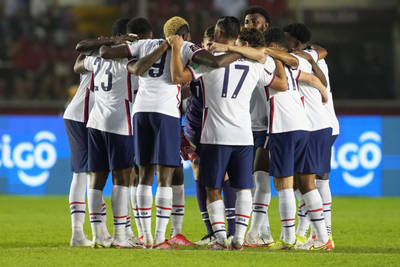 The United States lost its second game of the October international window, losing 1-0 at Panama. A tough first-half for the USMNT turned into a 1-0 Panama lead early in the second in a Concacaf World Cup qualifier at Estadio Rommel Fernandez. Panama's Anibal Godoy scored the game's only goal in the 54th minute and goalkeeper Luis Mejia didn't need a save to keep the clean sheet. The result leaves . . .

The USMNT continued their win streak in Group A of the 2015 CONCACAF U-17 Championship with a 4-1 win over Guatemala. Josh Perez started the scoring for the USMNT with a 10th minute free kick. Perez scored again in the 19th minute. He finished off his hat trick by converting a 45th minute penalty. Pierre da Silva made it 4-0 USMNT in the 48th minute. Guatemala pulled a goal back in the 65th. The . . . 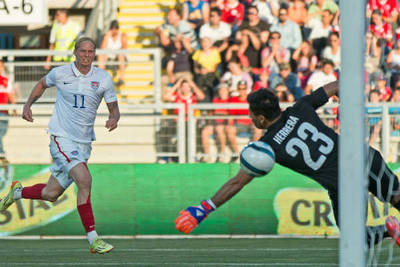 The USMNT started their 2015 schedule with a 3-2 road loss to Chile at Estadio El Teniente in Rancagua. As expected, USMNT coach Jurgen Klinsmann opted to play three defenders, including capping DC United defender Steve Brinbaum. Brek Shea put the USMNT up early with a 6th minute goal. Matt Besler played a ball into the box for Shea to run onto, beating Chile goalkeeper Johnny Herrera. It didn't . . .

The United States opened its 2012 schedule with a 1-0 friendly win against Venezuela at University of Phoenix Stadium.  The USA got a last gasp goal, with Ricardo Clark scoring from a Jermaine Jones corner kick late into stoppage time. The goal was the third of his National Team career. “I think the two corner kicks before were dangerous as well," Jones said of an attacking sequence that had . . .